A Torch is a dual use item primarily used to light dark areas and can also be used as a melee weapon. It can be crafted using the correct items, although it can be difficult to craft. A Torch requires resources that can be difficult to obtain for a new player. While it is not possible to melt, scrap or dismantle a Torch it can be used as a source of Combustible fuel.

As a Light[edit | edit source]

A Torch is used to provide light in dark areas and can be placed on almost any surface and will illuminate a small area around it. The player can move a torch from one location to another at any time by picking it up using the E key. A Torch does not need any type of fuel and will burn indefinitely until either destroyed or extinguished by water.

As a Weapon[edit | edit source]

A Torch is a very basic short range weapon and can kill an average Zombie with nine direct hits to the head or 17 hits or more to the body. It is more effective against a single Zombie and will not be very effective when dealing with even a small group of Zombies at close quarters. It can be used more effectively against a single Zombie when combined with the stealth of crouching to launch a sneak attack. There is also chance of setting a Zombie on fire while using a Torch as a weapon with a 10% chance per hit.

There is currently only one recipe for a torch in 7 Days to Die. 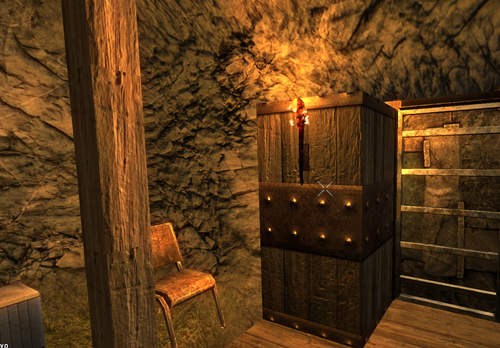