High School is a large two-story building with a total of 16 classrooms (8 on each story) and 8 bathrooms (4 on the bottom and 4 on the top); the classrooms usually don't have a lot of loot, but the lockers outside of the classrooms as well as the bathrooms both contain great quantities of loot; to include hats, bullets, bullet casings, weapons, and some food and drink. This is an excellent location for books and paper, used in TNT. In the inside you can see chairs and barricades that the students (Hypothetically) used to try to keep the infected out but they got overrun and the zombies that hint to this are the Team Z Player Football Zombie and Motivated Cheerleader Zombie.

While High Schools should theoretically spawn in Random World Generation, they have not been implemented yet.

The High School is located to the north in the Plains biome, close to an information center and an Army Base. 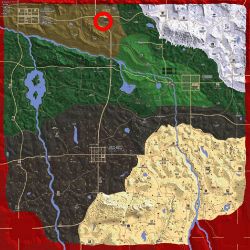 The video below shows the coordinates to the High School in Navezgane and demonstrates the types of loot containers and some loot as of alpha 13.8