Dishong Tower is the tallest building in-game as of A16, potentially taking a player up to 2-3 days with camping in between to reach the top of this building. It consist of 15 floors and 3 different Sections: Office Area, Construction Area, and Penthouse. It also provides parkour/exploration challenges, as the building can be scaled without destroying any of its iron bars or building any additional platforms. In the Navezgane map, it is located in the city of Departure. The roof is at a height of 107 meters in Navezgane.

Traps set by the fourth floor staff to stop the infected. 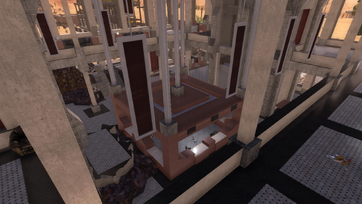 The Office Area of the Dishong Tower exists between floors 1-4 with the very bottom two floors being the lobby, and with the third and fourth floor containing all of the office equipment. The lobby consists of a sign in area, two kiosks, seven resting areas, a bathroom, and a small office in the far north west corner. The stairwell can be located on the east side of the building however, the stairs appear to have collapsed from the first floor up until the 3rd. The 3rd floor appears to have suffered major structural damage. Two major sections of flooring appear to have collapsed and fallen into the lobby below. There is also considerable damage to the walls, most likely made during the initial outbreak by the infected. Three rooms, labeled A, C, and D respectively, contain office cubicles and wooden desks along with other office related objects. A room separated by a curtain can be found as well, labeled 1 and 2. This room was most likely used to give executive meeting, however this is only speculation. This room leads out to a balcony which is fortified with sandbags and lit by a spotlight. It is possible that the military had done this as a way to provide the building with more protection, but it is difficult to tell. In the center of these sandbags sits an ammunition crate. On the southmost part of this floor, a small café of sorts can be found. The 4th floor is similar in that it contains cubicles, however the cubicles are not inside of rooms, but rather they surround another restaurant/café, this one much smaller than that of the third floor. This floor also appears to be suffering from damage. Three holes can be seen of this floor. The cubicles also appear to be designed more for consulting with customers or other important people rather than for an individual employee. It would appear that the staff of the fourth floor had attempted to stop the infected with traps and barbed wire, but to no avail. Just behind the café, a small office space can be found with a hole leading down to the 3rd floor bathrooms. Both the 3rd and 4th floor have bathrooms, one designated for men and one for women, however they are not marked. There is little difference between the two. Both contain four stalls, a mirror, and a single sink, however the third floor left bathroom is crushed under the 4th floor's collapsed floor.