The Demolisher Zombie (zombieDemolition) is a highly armored military zombie that appears in late-game Blood Moon hordes. They are easy to spot due to the great size and the green light of the explosive charge strapped onto their chest. Their specialties are the ability to stomp spikes and to explode, doing massive amounts of damage to both blocks and entities.

In addition, it has a very high armor rating of 60, meaning any physical damage it takes is reduced by 60%. Therefore, it is recommended to use armor-piercing (AP) ammunition, effectively reducing his armor rating to 30 (without the addition of perks and skill books). Hollow-point ammunition on the other hand will do 0 damage to the Demolisher.

As of alpha 19, demolishers buttons can NOT be set off by blade traps when set to head level. 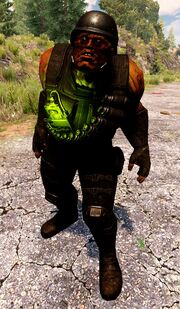 Cover of the Demolition Zombie (aka Demolisher).