Visually, a Burning Barrel is just a Gas Barrel with a flame animation on top, similar to a Campfire. However, touching the flame does not cause Burning, and the Burning Barrel will not explode like a Gas Barrel. Like all furniture type blocks, it can be attached to a wall. Also unlike the Campfire, standing near it will not give you the Warmed by a Fire buff. The Burning Barrel makes a constant crackling fire sound.

Functionally, it is just a big Torch. Unlike a Torch though, the Burning Barrel is a solid block with a high Structural Integrity

Note: All open flames might attract zombies by increasing the Heatmap as stated in-game. The burning barrel increases the Heatmap by 4.05%.

As a Light[edit | edit source]

A Burning Barrel is used to provide light in dark areas and can be placed on almost any surface and will illuminate a small area around it. The player can move a Burning Barrel from one location to another at any time by picking it up using the E key. A Burning Barrel does not need any type of fuel and will burn indefinitely until either destroyed or extinguished by water. 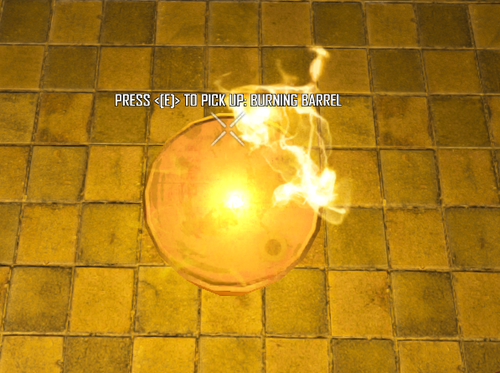 Burning Barrel will not cause Burning like a Campfire

Burning Barrel has a similar light to a Torch
Retrieved from "https://7daystodie.gamepedia.com/Burning_Barrel?oldid=121948"
Categories: